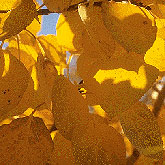 Long before humans even thought of cloning, aspen trees had mastered the art of vegetative reproduction. Like all other flowering plants, aspens produce seed, but their preferred method of reproduction is asexual. Mature trees send out underground suckers, or ramets, from their roots. The ramets sprout buds that grow into new, adult trees. The result is a large area of forestland covered by a single aspen clone. It's easy to spot aspen clones. They leaf out simultaneously in spring and turn the same color at the same time in fall.

Because ramets survive underground long after the parent tree is burned or cut, cloned aspens are frequent and successful pioneer colonizers after forest fires and logging operations. Sending out as many as 60,000 ramets per hectare, a single aspen can quickly invade bare ground as far as 40 meters from the parent tree. Because they draw water and nutrients from original tree, clonal sprouts grow far more rapidly than seedlings--as much as 1.8 meters (6 feet) their first year. Although individual 'trees' typically live no more than 200 years, new sprouts spring up as old ones die, making the aspen clone--in theory, at least--immortal. Some clones of quaking aspen in the United States are thought to be 8,000 to 10,000 years old.