A New Twist on Fiber Optics 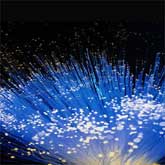 By twisting fiber optic strands into helical shapes, researchers have created unique structures that can precisely filter, polarize or scatter light. Compatible with standard fiber optic lines, these hair-like structures may replace bulky components in sensors, gyroscopes and other devices. While researchers are still probing the unusual properties of the new fibers, tests show the strands impart a chiral, or 'handed,' character to light by polarizing photons according to certain physical properties. Several of these fibers, and their applications, are being developed in part with funds from the National Science Foundation Small Business Innovation Research program. In conventional optical fibers, light is transmitted from one end to the other through a round core housed within a concentric outer cladding. But, because a circular core does not develop handedness when twisted, the research team wound rectangular-core fibers to create a double helix.

Because the environment surrounding the fiber affects the wavelength of the light embedded in the cladding, 'loosely' twisted fibers can serve as sensors for pressure, temperature, torque and chemical composition. With moderately twisted fibers, researchers can manipulate the resulting polarized light in useful ways, leading to a range of applications such as gyroscopes for navigation systems, current meters for electric power stations, and chemical and materials analysis equipment. For tightly wound fibers, the amount of twist determines the precise wavelength of the light remaining in the fiber, producing light that is ideal for filter and laser applications.