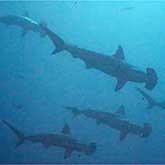 Hammerhead sharks might strike you as strange: or, they might just strike you. Among the oddest-looking of sharks, all nine types of hammerheads sport heads with sides stretched wide, like the head of a hammer on the end of its handle. Some look like shovels, bonnets, axes, or boomerangs. Scientists theorize that the hammer evolved, which indicates that it served the shark well. Certainly the 'hammer' serves many purposes - sometimes including striking prey while the shark holds it down. More common uses of this uncommon head are to aid in seeing and smelling: the shark's eyes and nostrils are located at the two ends of its head for wide-screen viewing and outstanding scent sleuthing.

Hammerheads can smell a drop of blood in one million drops of water - from a quarter-mile or 400 meters away. The wide space between the nostrils might also help the hammerhead sniff out the direction its prey is moving. The head's shape helps the hammerhead swim and dive, giving lift the same way wings help an airplane fly. Some hammerheads even 'speak' with their heads, and with other parts of their bodies as well. Bonnetheads shake their heads, swim in circles as if chasing their own tails, arch their backs, and raise their heads high. Sometimes they jerk up and down abruptly, or perform a corkscrew, twisting around while swimming fast in a circle.

The hammers on hammerhead sharks are soft at birth. As the shark grows, its hammer hardens. Unlike most sharks, hammerheads swim in schools. Perhaps these are known as the schools of hard knocks?