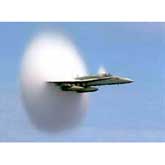 They sound like thunder, but they're not. They're sonic booms, concentrated blasts of sound waves created as vehicles travel faster than the speed of sound. To understand how the booms are created, look to the ocean. On the sea, there are small ripples in the water. As a boat slowly passes through the ripples, they spread out ahead of the boat. As the boat moves faster, it breaks through the ripples more quickly, forming waves. If it goes fast enough, the waves can't spread out fast enough, and they form a wake, which is much larger than a single wave. It is formed out of all the little waves that would have spread out ahead of the boat, but couldn't, because of the boat's speed. Now picture the same thing happening in the air. Instead of a boat, there is an airplane moving through the sky. When a plane travels through the air, it produces sound waves. You can't see sound waves like you can see waves of water, but they're still there.

If the plane is traveling slower then the speed of sound, then sound waves can spread out ahead of the plane. If it breaks the sound barrier and flies faster than the speed of sound, it produces a sonic boom when it flies past. The boom is the wake of the plane's sound waves. All the sound waves that would have normally spread out ahead of the plane are combined together, and you hear the boom. When you're on the shore of the ocean and a boat zooms past, at first there is no disturbance in the water, but shortly after, a large wave from the wake crashes up to the shore. When a plane flies past at supersonic speeds, the same thing happens. Instead of the large wake wave, you'll hear a sonic boom. Another way to think of sonic booms is to imagine all the molecules that make up our air. When planes fly through the air at moderate speeds, the molecules have time to move aside to let the plane through.