Dr. Hartman has 21 years of research experience in soybean pathology. He received his M.S. and Ph.D. degrees in 1984 in 1987, respectively, at the University of Illinois. Upon completion of his Ph.D., he held a postdoctoral position as the leader of the legume pathology program at the International Institute of Tropical Agriculture (IITA), Ibadan, Nigeria. From 1989 through 1992, Dr. Hartman was the head plant pathologist at the Asian Vegetable Research and Development Center (AVRDC) in Taiwan where part of his responsibilities was to conduct research on soybean rust. He began working for the USDA, ARS in 1993 at the University of Illinois. His current research program is focused on basic studies of variability and biology of soybean pathogens, epidemiology of soybean diseases, and the nature and genetics of host plant resistance.

The Rapid Movement of the Soybean Rust Pathogen

Soybean rust, caused by the fungus Phakopsora pachyrhizi, results in soybean yield losses of up to 80%. Rust diseases are named for the orange powdery spores produced in leaf pustules. They are easily ... Continue reading 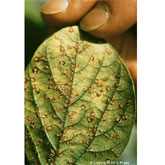