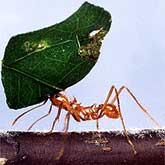 It's common knowledge that ants can lift many times their own weight. We are frequently told they can lift 10, 20, or even 50 times their weight. It is most often stated something like this: an ant can lift over its head objects that weigh 20 times what the ant weighs. This is the equivalent of a 220 pound (100 kilogram) man lifting over 4,400 pounds (2000 kilograms) over his head! Seems incredible, doesn't it? That's like lifting a new VW Beetle, with five big men inside, over your head. A person who could do that would be a superman!

As an animal, or any object, grows in size, its volume and weight increase much faster than its height. If a 220 lb (100 kg) man were to grow ten times taller, his weight would increase by a factor of 1000 (the cube of his height). He would weigh 220,000 lbs (100,000 kg)! The strength of his muscles, on the other hand, would increase by the square of his height, or by a factor of 100. He would be 100 times stronger but 1000 times heavier. His muscle strength could never grow as fast as his weight. It's simple geometry. There is little reason, then, to compare the strength of small animals to big animals when it comes to how much more than their weight they can lift.