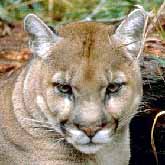 Cougars would make great basketball or track-and-field players. Of all the big cats, they are the best jumpers. They can jump 40 feet forward from a standing position, and 15 feet or higher straight up - higher than a basketball hoop.

They're strong, too. A cougar, weighing typically 130 pounds but as much as 200 pounds, can use its jaw to kill an elk four to five times its weight, by leaping onto the animal's back and breaking its spinal cord at the base of its skull. The cougar can kill almost any animal, but it avoids bad odds, keeping clear of wolves, grizzly bears, and other big cats. But its killing prowess is only one reason you probably wouldn't want a cougar on your team.

The cougar is a solitary cat, rarely seen; Native Americans once called it the 'ghost walker.' It avoids other animals and even, except when mating, other cougars. It roams a territory as large as 300 square miles, and on the rare occasion it does meet up with another cougar, it isn't likely to fight over its territory--much less go the distance to cross the finish line or slam dunk the winning two points for your team.