If You're Bringing Cows, Bring Your Own Decomposers 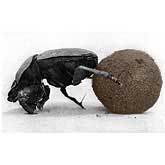 Living organisms create a lot of waste products. Every year they deposit millions of tons of dead plant and animal matter on almost every corner of the earth - and they make dung, lots of dung. Where would we be without the natural decomposers - millions of species of bacteria, fungus, and animals that eat all the dead matter and dung, turning it from useless waste into useful nutrients that are recycled back into the food chain?

Dung is the favorite food of hundreds of thousands of useful decomposer species. But in Australia, where for millions of years there were no large cattle-like grazers, there was little need for the decomposers of cow dung. Then, in 1788, the European settlers brought the first cattle to ever set foot in Australia. By 1960, there were 30 million cattle and, with few natural decomposers, the cow pies were 'pie'-ling up. Three hundred thousand tons of fresh manure a day were being deposited to dry in the sun, destroying about 5 million acres (2 million hectares) of rangeland each year, and producing a plague of flies.

In 1967, entomologists began releasing dung beetles brought from Africa, where many species of cow-like ungulates have a devoted following of them. The beetles liked Australian cow dung too. It began to disappear quickly. The soil quality also improved, as more nutrients were transferred to the soil when the beetles buried dung balls as food for their larvae. Much to everyone's relief, the fly populations too were significantly reduced. Now dung beetles are bred to order for a variety of dung removal tasks. They can even be used to clean up after dogs in city parks.