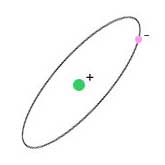 One of the products resulting from the collision, HD, traveled in an unexpected direction. As predicted by longstanding theories of scattering, the HD is expected to recoil, or scatter, in the opposite direction from that of the incoming H atom. In this experiment, however, the resulting product moved forward, in the same direction the single atom had been traveling. The experiment also revealed a time delay before the HD product began its forward motion. 'Even in the simplest kinds of chemical reactions, including hydrogen atoms colliding with hydrogen molecules, we are still finding surprises,' said Donald Burland, acting director of NSF's chemistry division. 'These results demonstrate the importance of continued research in fundamental chemistry.'

'This news is quite exciting for the world of chemistry because it suggests that the 'simple' hydrogen reaction is a more complicated process than previously thought, involving more than one reaction mechanism,' said Stanford chemist and team leader Richard Zare. The results of Zare's experiment demonstrate that the hydrogen reaction involves more than the direct atom-molecule exchange mechanism commonly observed. The explanation, the Stanford scientists believe, is that in addition to the direct reaction mechanism that leads to backward scattering, as predicted, another indirect mechanism at the quantum mechanical level (the level of subatomic particles) leads to forward scattering after a brief delay. Both the forward motion and the time delay are in keeping with new theories recently developed by a team at the University of Durham, England, led by Stuart Althorpe.