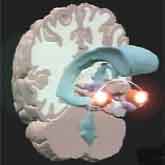 The limbic (meaning 'ring') system is virtually identical in all mammals. It sits above the brain stem, resembling a bagel with a finger (the brain stem) passing through it. This limbic 'system' comprises a large group of complex nuclei and oddly shaped smaller structures (with tongue-twisting names that seem designed to confuse rather than illuminate) surrounding the upper portion of the brain stem. Their interconnections and wiring to the cerebral cortex are linked to our basic drives, body temperature control, hormone production, and emotions.

Mammals with limbic systems typically engage in a long-term investment with their young and remain close to them until the members of their litter can manage the task of survival on their own. These caring parents will nurse and protect their young with selfless dedication in life-threatening situations. On the other hand, reptilian mothers, without a limbic system, experience no grief at the loss of any of their offspring, and, due to their cannibalistic inclinations, will often pose one of the first threats to the lives of their offspring. However, a state of emotional detachment from one's young can be surgically produced when mammals have been subjected to a limbectomy. Not only will these limbic-less mothers display complete emotional disengagement from the needs of their progeny, but their ability to continue recognizing the existence of other members in their pack will also be impaired. On the other hand, damage to the cerebral cortex will not lead to the slightest decline in one's maternal instincts. However, damage to any of the structures making up the limbic system or the removal of those structures will produce immediate behavioral changes that show a disturbing lack of interconnectedness with others, including those to whom a mother had earlier given the precious gift of life.