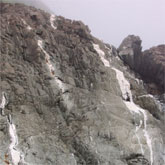 There are three rock types on earth, named according to how the rock is formed. Igneous rock forms as it cools to a solid from molten rock. Sedimentary rock is formed from the consolidation of particles that come from other rock that has been weathered and eroded. Metamorphic rock forms when solid rock is altered by intense heat, pressure, or both. The original, unaltered rock is called the 'parent' rock and can be igneous, sedimentary, or metamorphic in origin.

Metamorphism (from the Greek terms 'meta'--to change, and 'morph'--form) can occur in several ways. 'Regional' metamorphism occurs when huge masses of magma are intruded deep within the crust over a wide area. The intrusion often occurs along converging (colliding) or diverging plate boundaries and causes high heat and high pressures. Superheated fluids circulating through rock pores and fractures are also involved in regional metamorphism. The fluids can come from the magma, from groundwater, or perhaps even from sea water entering at the plate boundary. These fluids cause 'metasomatism'--chemical changes in the rocks due to the exchange of elements between the fluids and the heated rocks. Rocks may be so altered that the parent rock cannot be identified.

'Contact' metamorphism occurs over a fairly small area when veins of magma are intruded in the upper crust. Pressures do not increase much, but high heat can cause recrystallization. 'Dynamic,' or 'cataclastic', metamorphism often occurs along faults. The rocks can be ground to a powder or may be altered by sudden high pressures at low temperatures. 'Impact' metamorphism occurs around meteor craters. The sudden impact pressure alters surface minerals producing those usually found only in the lowermost crust. Some useful metamorphic rocks are marble and slate. Profitable metal mines (copper, iron, etc.) are often found in zones of contact metamorphism or along the outer boundaries of regionally metamorphosed rock. Some other common metamorphic rocks are quartzite, micas, schist, and gneiss.