Microarrays: Chipping Away At The Mysteries Of Science And Medicine 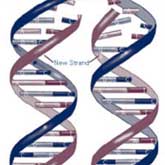 With only a few exceptions, every cell of the body contains a full set of chromosomes and identical genes. Only a fraction of these genes are turned on, however, and it is the subset that is 'expressed' that confers unique properties to each cell type. 'Gene expression' is the term used to describe the transcription of the information contained within the DNA, the repository of genetic information, into messenger RNA (mRNA) molecules that are then translated into the proteins that perform most of the critical functions of cells.

The proper and harmonious expression of a large number of genes is a critical component of normal growth and development and the maintenance of proper health. Disruptions or changes in gene expression are responsible for many diseases.

Scientists study the kinds and amounts of mRNA produced by a cell to learn which genes are expressed, which in turn provides insights into how the cell responds to its changing needs. Gene expression is a highly complex and tightly regulated process that allows a cell to respond dynamically both to environmental stimuli and to its own changing needs. This mechanism acts as both an 'on/off' switch to control which genes are expressed in a cell as well as a 'volume control' that increases or decreases the level of expression of particular genes as necessary.