A Creature Only A Mother Could Love? 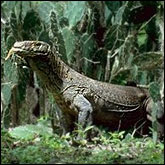 A creature only a mother could love isn't even much loved by its own mother. The Komodo dragon, weighing as much as 300 lbs. (136 kgs) or more, eats more than half its own weight in one meal. It swallows large chunks of meat whole, often consuming an animal in three or four bites. And it eats nearly anything: goats, wild pigs, boar, deer, water buffalo, civit cats, rats, chickens, fish, snakes, birds and birds' eggs, crabs, snails, clams - and other Komodo dragons.

What it can't catch and kill outright, the Komodo dragon pursues with germ warfare. Four of the many kinds of germs living inside the reptile's saliva cause blood poisoning. An animal wounded by a Komodo dragon will crawl off to die in a day or two. Another germ in the dragon's saliva infects wounds, giving them a foul odor. So, should one of the fatal germs fail to do in the animal, the Komodo dragon can smell its wound, find it, and kill it - with a powerful blow or with its serrated teeth. A Komodo dragon also finds prey using its 'smell-taste' vomero-nasal sense, located in the roof of its mouth, which tastes tiny particles caught on the tip of the dragon's forked tongue.

An endangered animal that lives on only one small patch of the planet, a 575-square mile area (599 sq. km) on a chain of islands near Indonesia, the Komodo dragon battles temperatures that reach reach 110 F (43 C), volcanoes, earthquakes, typhoons, shark-infested waters, and the world's largest population of deadly snakes and spiders. But its greatest threat is its own small population. Between 3,000 and 5,000 Komodo dragons exist, about 200 of them in zoos. Young Komodo dragons often live in trees the first year of their lives, before moving to the ground when they're about three feet long. Why? The strategy helps protect them from being eaten - by adult Komodo dragons.