Nothing Backwards About It 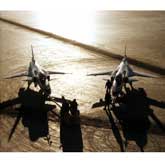 Almost anyone who's seen a picture of the experimental X-29 aircraft will remember it. Its unique wings make it one of the most distinctive aircraft designs ever. Rather than sticking straight out or angling back towards the aft of the plane, the wings on the X-29 almost look like they were put on backwards. They start near the tail of the plane, and sweep forward toward the cockpit. The result is an immediate impression that this is one cool-looking airplane. But, once you get past its unusual appearance, a question has to be raised: Why? The forward-swept wings on the X-29 help its maneuverability. In particular, the plane has excellent angle-of-attack capabilities. Angle of attack is the difference between where the front of the wing is pointed and where the airflow is coming from. Imagine an airplane flying in a straight line, parallel to the ground, and then pulling up.

As it does so, the airflow initially is still coming from the direction the plane is heading in, but the wings have angled upward from that direction. Because of the way wings are shaped, increasing the angle of attack increases lift. In other words, if you point the nose higher, the airplane goes higher. However, there is a limit to this. At some point, the drag created by the increased angle of the wing exceeds the created lift. At that point, the wing 'stalls,' and the plane loses altitude. The 'backwards' wings on the X-29 reverse the flow of air, directing airflow inward toward the fuselage instead of outward to the edge of the wings. The result prevents the wing tips and their ailerons from stalling at high angles of attack. But, if the forward-swept wings on the X-29 provide such benefits, that raises another question.

Why don't other airplanes have wings that angle forward? The answer is that, before the X-29, few airplanes could fly with wings like that. The few airplanes with forward-swept wings that were built before the X-29 were designed that way for structural reasons. It allowed engineers to place the wings farther back along the fuselage. However, these planes were unable to take advantage of the aerodynamic benefits the X-29's thin wings provided. There were two major reasons for this. The first had to do with the additional stresses placed on the wings in that configuration. Engineers had not been able to find a way to make wings strong enough to withstand the bending and twisting forces the forward-swept design caused but still able to provide the aerodynamic advantages. The X-29 uses a composite material that is capable of withstanding the aerodynamic forces, and yet is still lightweight. The composite wings were also designed to allow some bending without loss of structural integrity.