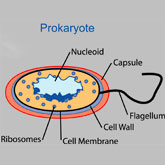 It appears that life arose on earth about 4 billion years ago. The simplest of cells, and the first types of cells to evolve, were prokaryotic cells--organisms that lack a nuclear membrane, the membrane that surrounds the nucleus of a cell. Bacteria are the best known and most studied form of prokaryotic organisms, although the recent discovery of a second group of prokaryotes, called archaea, has provided evidence of a third cellular domain of life and new insights into the origin of life itself.

Prokaryotes are unicellular organisms that do not develop or differentiate into multicellular forms. Some bacteria grow in filaments, or masses of cells, but each cell in the colony is identical and capable of independent existence. The cells may be adjacent to one another because they did not separate after cell division or because they remained enclosed in a common sheath or slime secreted by the cells. Typically though, there is no continuity or communication between the cells. Prokaryotes are capable of inhabiting almost every place on the earth, from the deep ocean, to the edges of hot springs, to just about every surface of our bodies.

Prokaryotes are distinguished from eukaryotes on the basis of nuclear organization, specifically their lack of a nuclear membrane. Prokaryotes also lack any of the intracellular organelles and structures that are characteristic of eukaryotic cells. Most of the functions of organelles, such as mitochondria, chloroplasts, and the Golgi apparatus, are taken over by the prokaryotic plasma membrane. Prokaryotic cells have three architectural regions: appendages called flagella and pili--proteins attached to the cell surface; a cell envelope consisting of a capsule, a cell wall, and a plasma membrane; and a cytoplasmic region that contains the cell genome (DNA) and ribosomes and various sorts of inclusions.