Proteins Function Through Their Conformation 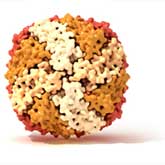 To produce proteins, cellular structures called ribosomes join together long chains of subunits. A set of 20 different subunits, called amino acids, can be arranged in any order to form a polypeptide that can be thousands of amino acids long. These chains can then loop about each other, or fold, in a variety of ways, but only one of these ways allows a protein to function properly. The critical feature of a protein is its ability to fold into a conformation that creates structural features, such as surface grooves, ridges, and pockets, which allow it to fulfill its role in a cell. A protein's conformation is usually described in terms of levels of structure. Traditionally, proteins are looked upon as having four distinct levels of structure, with each level of structure dependent on the one below it. In some proteins, functional diversity may be further amplified by the addition of new chemical groups after synthesis is complete.