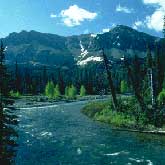 Rainfall in the mountains has a major influence on nearby river levels, and its effects can be seen as much as 50 years after the rain has fallen, according to hydrologists funded by the National Science Foundation (NSF). Scientists had believed that the downslope distance from a mountain to a river is significant, such that rain falling on a mountaintop doesn't have an impact on a river below, according to Christopher Duffy, a civil engineer at Pennsylvania State University. But Duffy has found that rainfall and snowfall over the mountains, at least in the basin and range area of New Mexico, play an important part in recharge of the water table and the Rio Grande River. 'This has huge implications for development,' Duffy today told attendees at this week's spring meeting of the American Geophysical Union in Montreal, Canada. 'The role of the water table is important.'

Duffy uses a computer model to investigate groundwater in central New Mexico. The terrain is divided into three areas: mountains; sloping bajada; and riparian or river area. Duffy looks at environmental variables including rainfall, snowpack, evapotranspiration and altitude. Also important, he says, are the geologic porosity and conductance of the rocks. Much of the data comes from the SAHRA - Sustainability of Semi-Arid Hydrology and Riparian Areas - Center, an NSF Science and Technology Center. SAHRA is based at the University of Arizona; Penn State is a partner. 'Much of the country depends on groundwater resources,' says Doug James, program director in NSF's division of earth sciences, which funds SAHRA. 'Duffy has developed a means of quantifying recharge locations and rates to determine impacts of land use and river management. The results will be used to guide planning for sustained aquifer management in the decades ahead.'

In the Llano de Sandia in New Mexico, the Los Pinos Mountains are about 9,000 ft. high while the area below in which the river runs is at an elevation of about 4,800 ft. About a mile separates the mountains from the river. Precipitation in these mountains doesn't all run downslope, nor does it all seep into the mountains. Some of the water goes deep into fractured rocks beneath the mountains. 'The time between rainfall on the mountains and ultimate recharging of the riverine water table is about 50 years,' says Duffy. 'The seven-year, 1950s drought in the area is what is now affecting the Rio Grande and the water table. 'Developers of New Mexico's mountains and bajada regions need to consider a longer time horizon than a decade when planning to alter the natural environment. It may require a forward view of tens of decades to ensure sustainability. Even if no obvious year-round streams run from the mountains, they are still very important for the recharge of the water table and river.'