The Sound of Turbulence 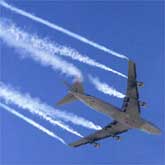 Do you ever watch the water tornado that forms in a draining bathtub? Woe unto any rubber ducky floating aimlessly in the vicinity; the water's force will pull it down into the tornado. The center of the swirl--the vortex--creates a whirlpool so strong that it's hard for small objects to escape. The same thing happens in the sky with jets. Planes produce wake vortices when they fly, much like two small tornados trailing behind the wing tips. Small aircraft suffer the same fate as the rubber duckies in the bathtub. Getting caught in a jet's wake vortex can cause enough turbulence to make a small plane crash. Large planes caught in vortices may not crash but could experience a very bumpy ride and other difficult flying conditions. Air traffic controllers stagger the takeoffs and landings of aircraft to prevent airplanes from getting too close to another plane's wake vortex. But, pacing the flights is also one cause of delays at airports.

Finding a way to better gauge the strength of the vortices would help airports move traffic more efficiently than they do now. While knowing about wake vortices isn't new, understanding them is being approached from a new perspective. Scientists are studying the sounds that wake vortices make. Researchers recently spent several weeks collecting acoustic data at the Denver International Airport using precisely calibrated microphone arrays to measure sound generated by airplane wake vortices. Two laser radars, called lidars, recorded the actual position, track, and vortex strength in order to look for patterns and characteristics within the signals. During the testing, researchers evaluated a laser-based sensor. It works by sending low-power laser beams across open space onto a reflector. The device reflects the beams back to the receiver and measures the changes in the laser beams. That measures the sound, which can be mapped, gauged, and translated into a number that rates danger.

Scientists want to determine whether a wake vortex sensor that uses sound would be a helpful tool for airports. One of the key concerns is to determine if there is a relationship between a sound signal and the hazard the wake represents. The lidar systems will provide estimates of those hazard levels. Developing some sort of detector or sensor will help pilots avoid this danger of flight. An effective system could give pilots advance warning of the location and nature of hazardous conditions. The technology could also increase runway capacity, because air traffic controllers would have a better idea where wakes are and how they affect flight. Controllers could use that information to efficiently separate aircraft.