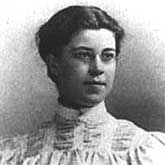 When you think of airplanes, you may think of Wilbur and Orville Wright. Their early experiments led to the first manned airplane flight 100 years ago. There's another member of the Wright family, however, who also played an important role in the airplane industry. Katharine Wright isn't as well known as her brothers, but her work helped make Wilbur and Orville the most famous names in aviation. Katharine was born on Orville's third birthday: August 18, 1874, in Dayton, Ohio. Her mother died when she was 15 years old, and that led to Kate, as her friends called her, taking on many household responsibilities while she was still very young. After graduating from Oberlin College in 1898, she became a schoolteacher and taught Latin and English. During those same years, Wilbur and Orville began experimenting with flying. Kate was eager to help. She brought some of her teacher friends down to the test area to help with some of the projects.

Some stories say that Kate calculated many of the flight formulas, and that she designed and sewed the fabric wing covers. Other accounts say those are legends that make the story sound more appealing but aren't accurate. In the early 1900s, women's accomplishments were often downplayed, which makes it hard for historians to separate fact from fiction. In 1908, Orville had a serious accident while demonstrating a military airplane. He suffered broken hips, ribs, a sprained back, and a concussion. Kate left her job as a teacher to care for her brother. Part of the care meant that she took over business operations in Washington while Orville recovered and Wilbur was in France promoting another airplane. Once Orville was feeling better, all three Wrights traveled across America to spread the word about airplanes. Kate was a corporate officer for The Wright Company, America's first aircraft manufacturing firm.

Orville and Wilbur were shy and uncomfortable making speeches and meeting business partners, so Kate became the company spokesperson as well. She soon became famous for showing how safe airplanes could be. If televisions had existed in the early 1900s, you would have seen Kate on The Wright Company commercials, urging Americans to take a flight on the newest sensation: airplanes. She had an energetic personality and enjoyed sharing her brothers' message. One of her slogans about airplane safety was, 'If a woman can do it, it must surely be safe!' One observer described her as 'someone with coal black hair, deep blue eyes, and a smile that could blind you.' Kate died of pneumonia on March 3, 1929. After her death, the National Aeronautic Association created the Katharine Wright Memorial Award. Every year, it's presented to women playing an influential role in U.S. space and aviation.